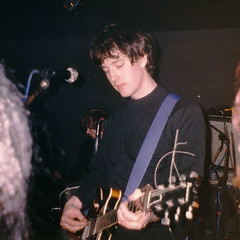 All the news reports claimed tickets sold out for the gigs next June (!!!) in minutes. I eventually got mine around 11am, almost two hours later, so take that, news reports (and thank you Roundhouse website for working so smoothly, once you actually got the tickets in your shopping cart). We’re upstairs, sat down – my first MBV gig where I’m sitting down, which seems a bit weird, but then I’m going to be 20 years older from the time I saw them originally, as pictured here.

This gig was on the 26th January 1988, the venue was Ricky’s in Leeds. So at this point I was still seventeen, I’ve no idea how I’d have got there (I suspect that people at York Uni probably took a minibus there, and we went with them as we were young girls, who liked good music).

I saw MBV a few times in the late eighties – they even played York Uni, or at least, in my head I think they did. I could be wrong. I wish I’d kept better diaries back then.

This entry was posted in chatter. Bookmark the permalink.

This site uses Akismet to reduce spam. Learn how your comment data is processed.